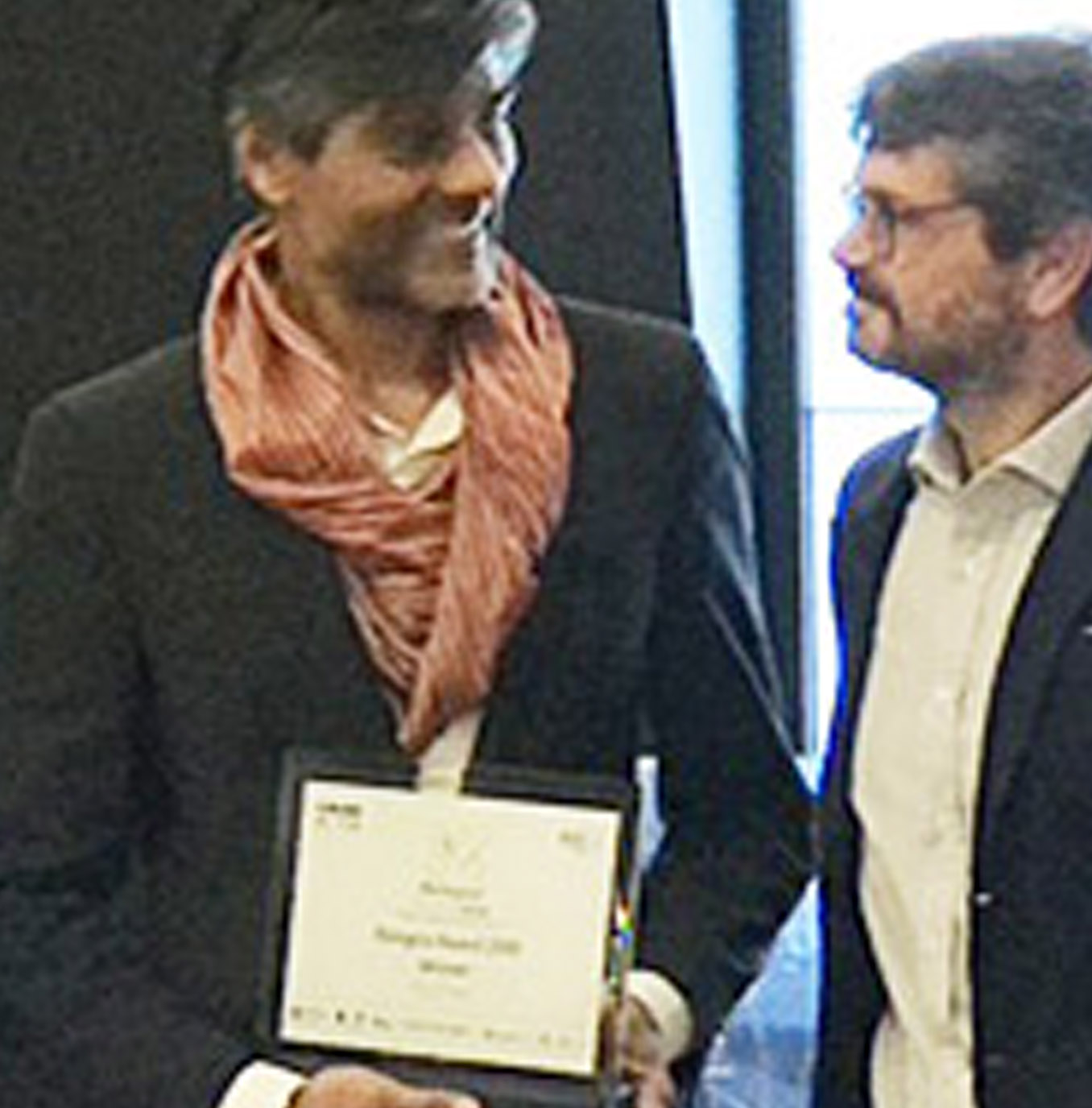 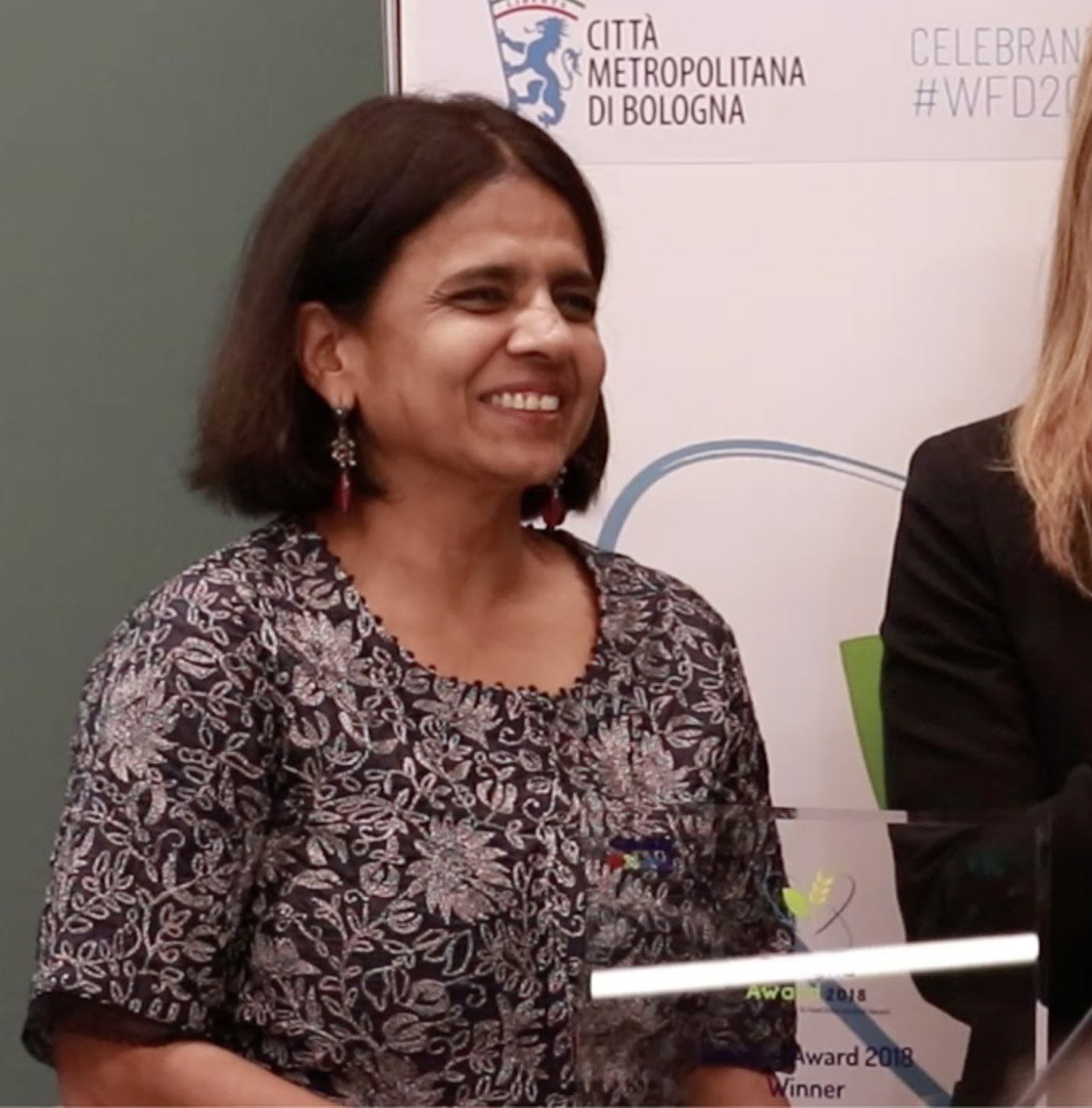 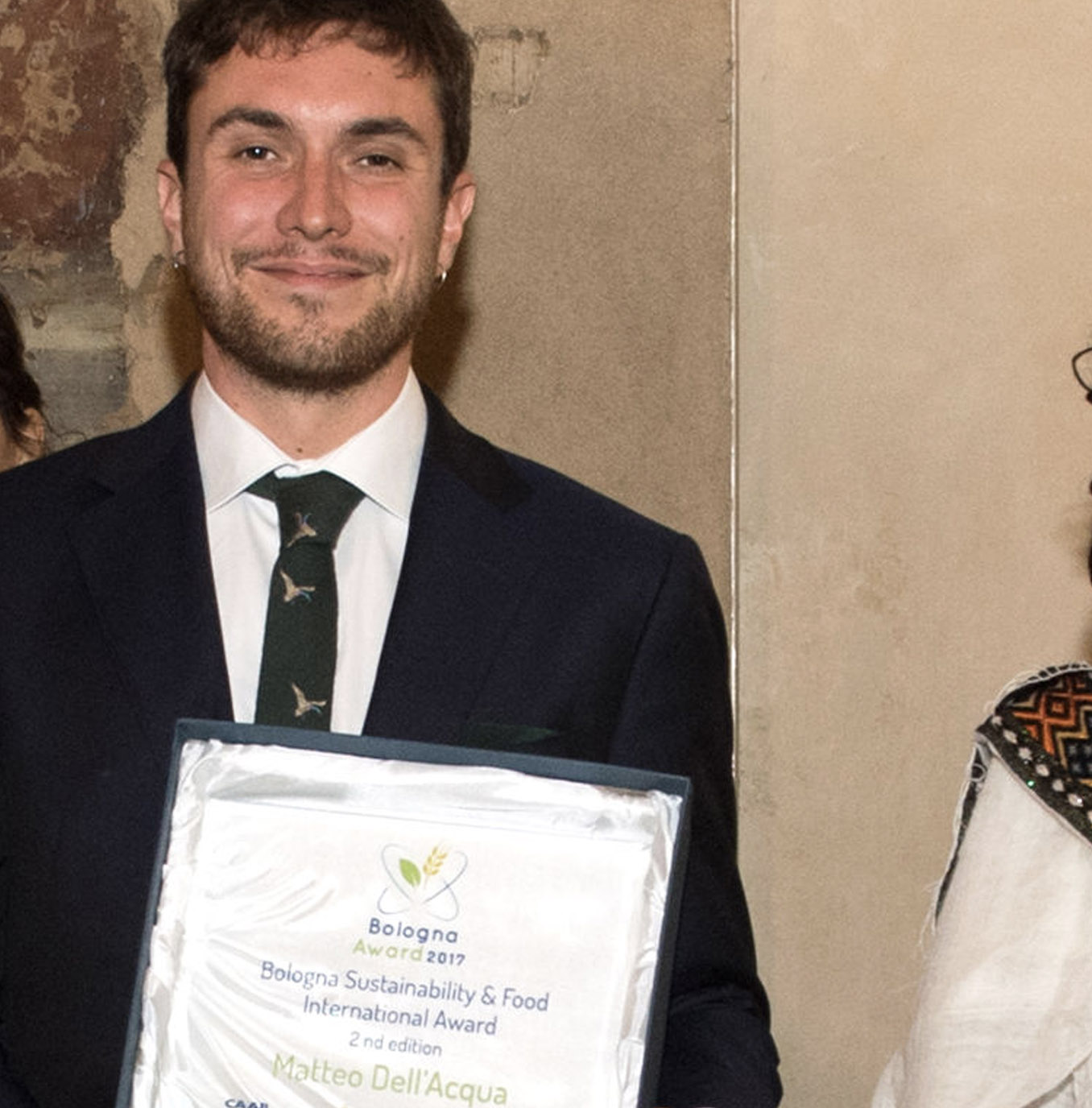 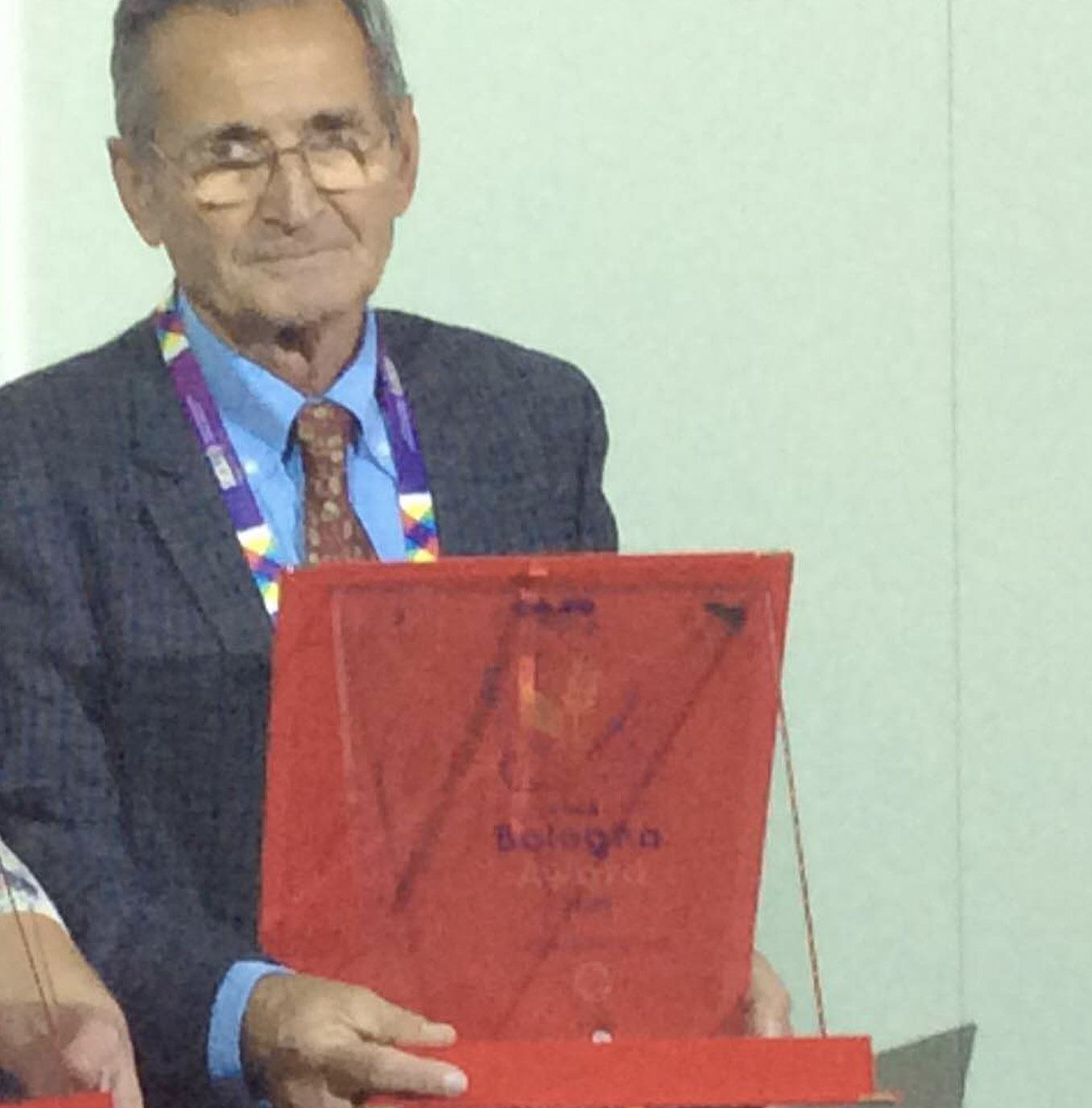 Promoting scientific and technological research on agri-food sustainability, reducing the environmental and social impact of food production and distribution also supporting a new and widespread culture in the name of food education are the main objectives of Bologna Award.

Lea Nicita, is Marie Sklodowska-Curie Global Research Fellow at Yale School of Environment and Centro Euro-Mediterraneo sui Cambiamenti Climatici, and principal investigator of Climate change and Resilience of Agricultural Systems project (CRAS). Her current research emphasis is on sustainable and diversified agricultural landscapes, climate change impacts on agriculture, and climate perceived risks and adaptation in agriculture. Lea has co-authored papers in the field of economics of climate change and non-market valuation of environmental resources. She holds a PhD in economics from University of Venice and a MSc in Economics from the University of York; she had worked as senior researcher at Eni Enrico Mattei Foundation and Centro Euro- Mediterraneo sui Cambiamenti Climatici. Lea is a passionate mom and traveller.

Alessandro Matese, is a researcher at the Institute for Bioeconomy of the National Research Council of Florence. Degree in Natural Sciences from the University of Florence, Department of Geological Sciences. Doctorate in Agriculture, Forests and Food Sciences at the University of Turin, Doctoral School of Innovative Sciences and Technologies. The main research activities are focused on the use of monitoring technologies in agriculture, remote sensing, use of drones and satellite image analysis. Precision agriculture represents a main research topic, both in terms of the study of sensors and for the analysis of data with the most innovative techniques of data fusion, machine learning and geostatistics. Author of 60 publications in international scientific journals and invited speaker at the most important national and international conferences on precision agriculture. Coordinator of projects at international and national level, such as DATI, supported by the EU Euro-Mediterranean action program, Prima 2020, which focuses on the rational use of water resources in the context of Mediterranean agriculture and experiments.

Giacomo Grassi, senior scientific officer at the Joint Research Center (JRC) of the European Commission since 2005, graduated in Agricultural Sciences with a PhD in Forest Ecology at the University of Bologna. Since 2005 he has been a scientific officer of the European Commission at the Joint Research Center, Ispra (VA). His work includes research on the carbon balance of forest ecosystems on a European or global scale, and various scientific support activities to European policy makers regarding forests and climate change. These activities include, the coordination of the greenhouse gas inventory of the European Union (Land Use sector, Land-Use Change and Forestry), the projections on the carbon uptake of European forests, the support to the climate policies of the European Union and negotiations under the Paris Accords. He is an expert auditor of greenhouse gas inventories for the United Nations. He is the author of several IPCC reports, including "Methodological Refinement of the 2006 Guidelines for GHG inventories", "Special Report on Climate Change and Land" and "6th Assessment Report". He is the author of over 50 publications in international scientific journals.

Raj Patel, is a world-class economist committed to sustainable development, a Research Professor at the Lyndon B Johnson School of Public Affairs at the University of Texas, Austin and Senior Research Associate at the Rhodes Humanities Unit University (UHURU), South Africa. He is a graduate of Oxford University, has master's degrees from the London School of Economics and Cornell University, has worked for the World Bank and the WTO. He was co-professor with Michael Pollan at the 2014 UC Berkeley Food Education course. In 2016 he was awarded the James Beard Foundation Leadership Award. He has testified on the causes of the global food crisis to the United States House Financial Services Committee and is a member of the International Panel of Experts on Sustainable Food Systems. In addition to numerous academic publications in economics, philosophy, politics and public health journals, he writes regularly for The Guardian and has contributed to the Financial Times, Los Angeles Times, New York Times, Times of India, The San Francisco Chronicle, The Mail on Sunday and The Observer. His first book, Stuffed and Starved: The Hidden Battle for the World Food System (Feltrinelli 2008) was already a detailed analysis of the global food system. The second, The Value of Nothing (The value of things and the illusions of capitalism, Feltrinelli 2010) was a global best-seller. The most recent, co-written with Jason W. Moore, is A History of the World in Seven Cheap Things (A radical guide to the deceptions of capitalism, Feltrinelli 2018). He is currently working on a documentary project on the world food system.

Sunita Narain is one of the best known environmentalists worldwide. She conducts her research with forensic rigor combined with passion, so that knowledge can lead to the changes the earth needs. She is the Director General of the CSE - Research Center for Science and the Environment (CSE) of New Delhi and editor of the fortnightly magazine Down To Earth. In 2016 she was included by TIME magazine in the list of the 100 most influential people in the world. She took part in the film “Before the flood” of Leonardo di Caprio to raise awareness on the future of the planet. Under her leadership, the CSE has gained immense fame through campaigns, research and publications. The annual Global Go To Think Tank Index of the University of Pennsylvania, an international reference for the sector, has positioned the CSE among the most influential environmental think tanks in developing countries for three consecutive years, from 2015 to 2017. In 2015 CSE was also recognized as "Public Institution of the Year" by India's leading business standard, the Business Standard. Sunita Narain's career began in the early 1980s as a co-researcher of CSE founder Anil Agarwal. She has been co-author of influential publications on India's environment, conducted in-depth research on the governance and management of the country's environment, and directed campaigns on air pollution control. CSE is at the forefront of calling for a food policy designed for nutrition, livelihoods, biodiversity and sustainability. She has received many awards: in 2005 she was awarded the Padma Shri by the Indian government. In the same year she received the prestigious Stockholm Water Prize for her work on rainwater harvesting and community-level water management. Penguin recently published his new book “Conflicts of Interest”, which chronicles the CSE campaigns. Sunita Narain has served in important Indian government committees to promote environmental and development policy towards equity, sustainability and livelihood goals. She is a member of the advisory board of the EAT forum.

Matteo Dell’Acqua is a geneticist from the Scuola Superiore Sant'Anna in Pisa. After graduating in Evolutionary Biology at the University of Milan, he moved to the city of the leaning tower to work on the themes of agrobiodiversity and genetic improvement of crops. Matteo uses genomic, statistical and bionformatic tools to identify genes capable of producing new varieties that respond to the needs and expectations of the agriculture of the future. He works alongside students and researchers from emerging countries and with them he studies the interactions between genetic diversity and cultural diversity in the agricultural systems of the southern hemisphere. His research involves subsistence agricultural communities in the selection and production of new varieties that meet the needs of marginal agriculture, and for this reason he was awarded the Bologna Sustainability and Food Award 2017.

Salvatore Ceccarelli was a full time professor of Agricultural Genetics at the Institute of Genetic Improvement, University of Perugia until 1987. Since 1980 he has conducted research at ICARDA (the International Center for Agricultural Research in Dry Environments, Aleppo, Syria) until 2006 , and served the Center as a consultant until 2014. He left Syria in 2011, for moving first to France and then to India until 2016. He is currently a freelance consultant for various organizations including Bioversity International. During his career, he has supervised nearly 25 master and doctoral students, conducted training courses for researchers in China, Australia, South Africa, the Philippines, Yemen, Jordan, Ethiopia, Eritrea, India and Bhutan, and published over 280 scientific papers; he has been a speaker at nearly 30 international conferences. He currently works on projects in Uganda, Ethiopia, Jordan, Iran, Nepal, Bhutan and Europe. He deals with genetic improvement, in particular for drought resistance in a participatory way and with evolving populations, and with the relationships between biodiversity, climate change, food and health.