The objectives, the promoters, the history and the editions. 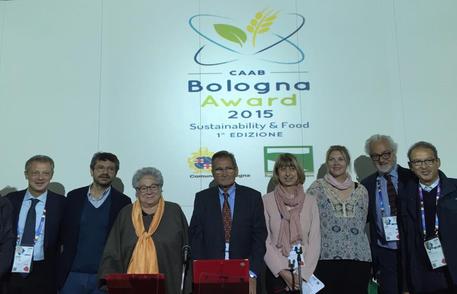 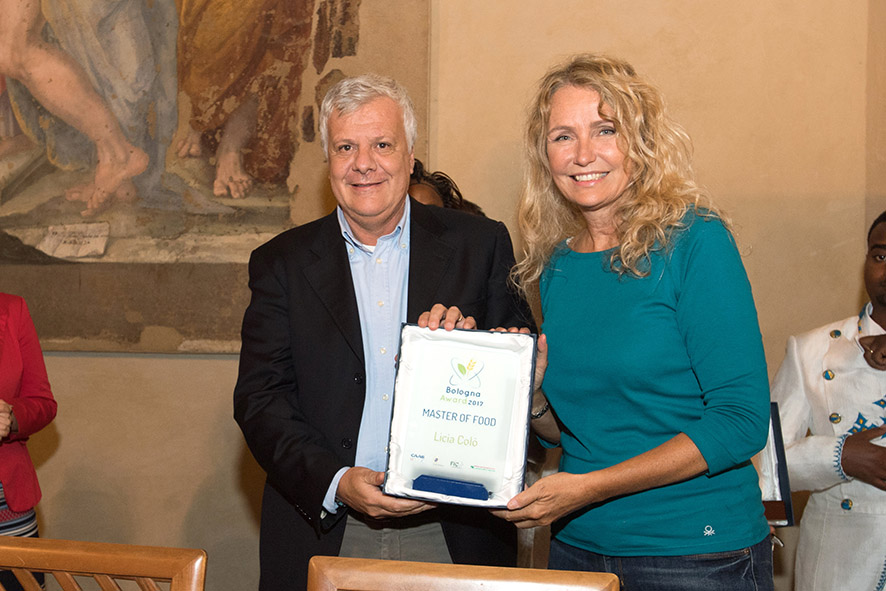 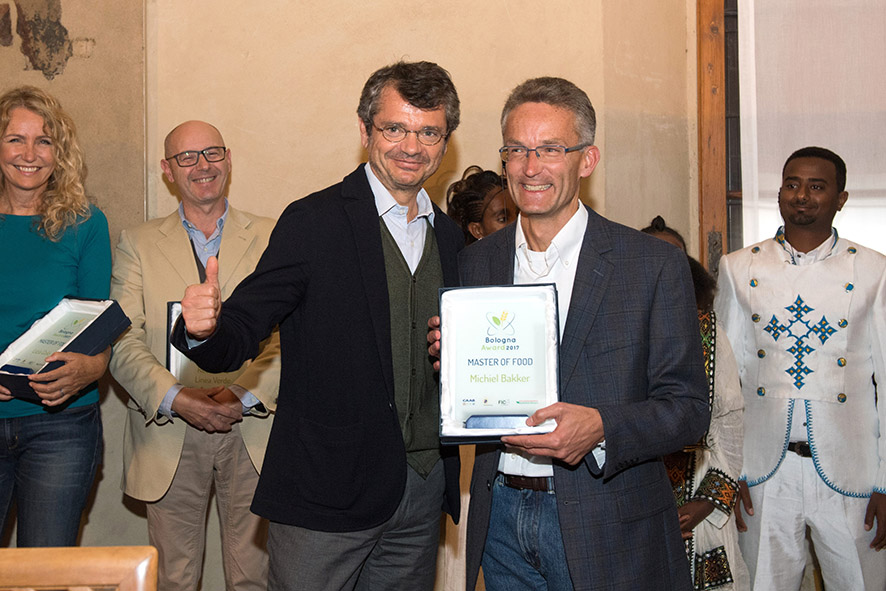 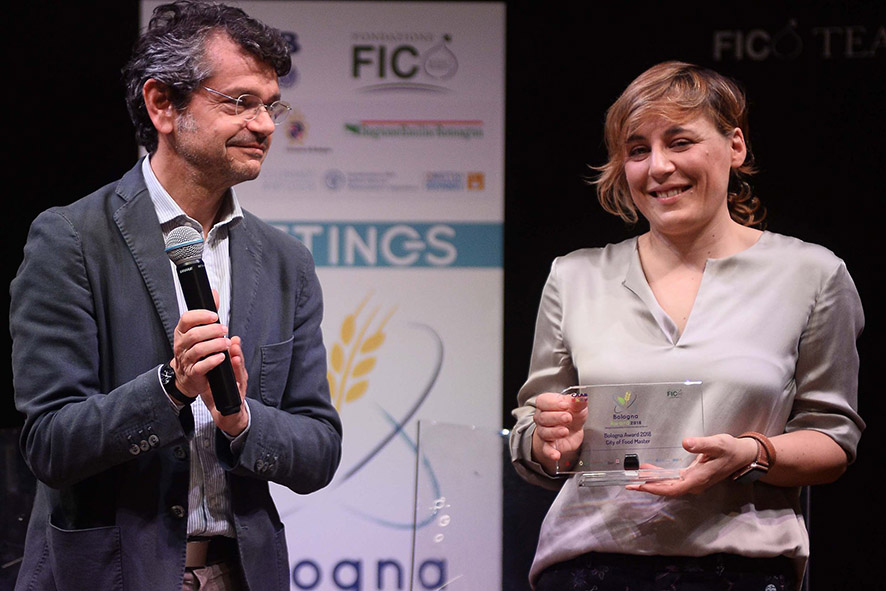 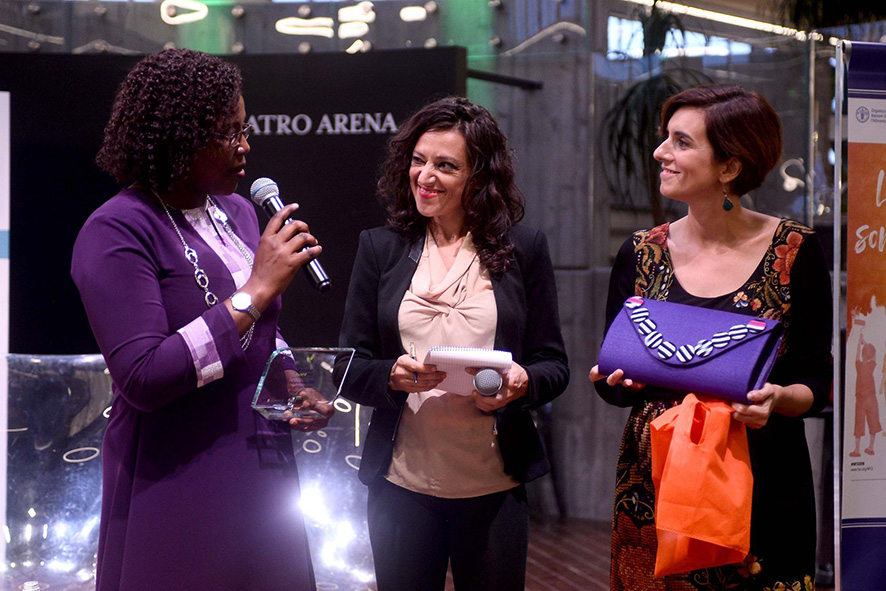 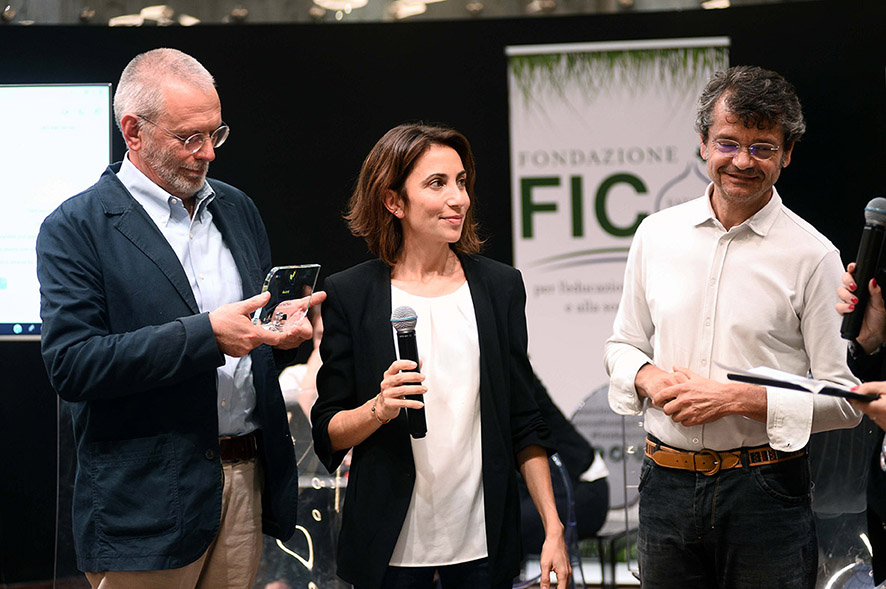 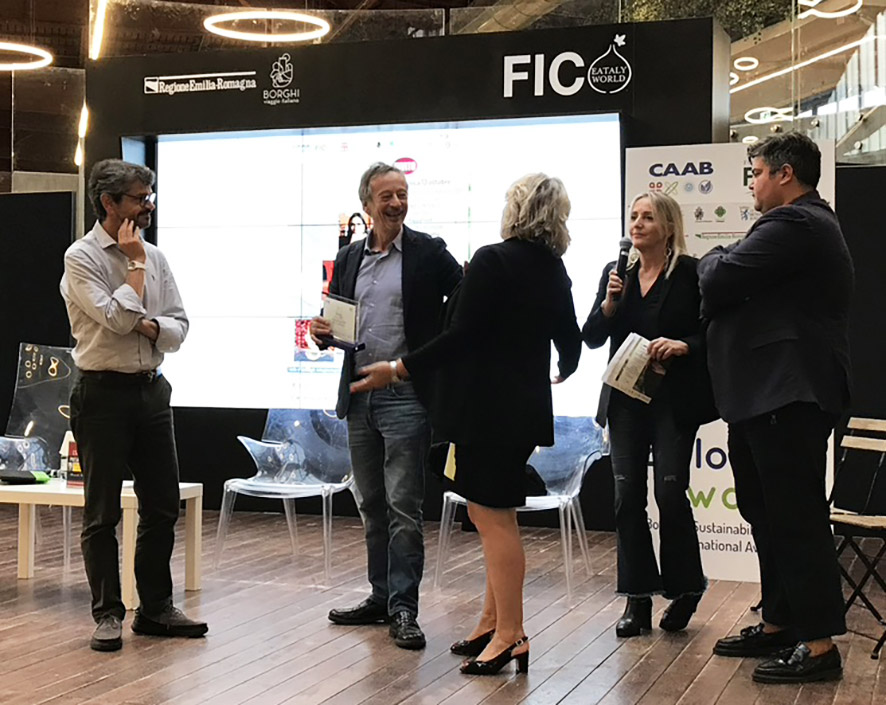 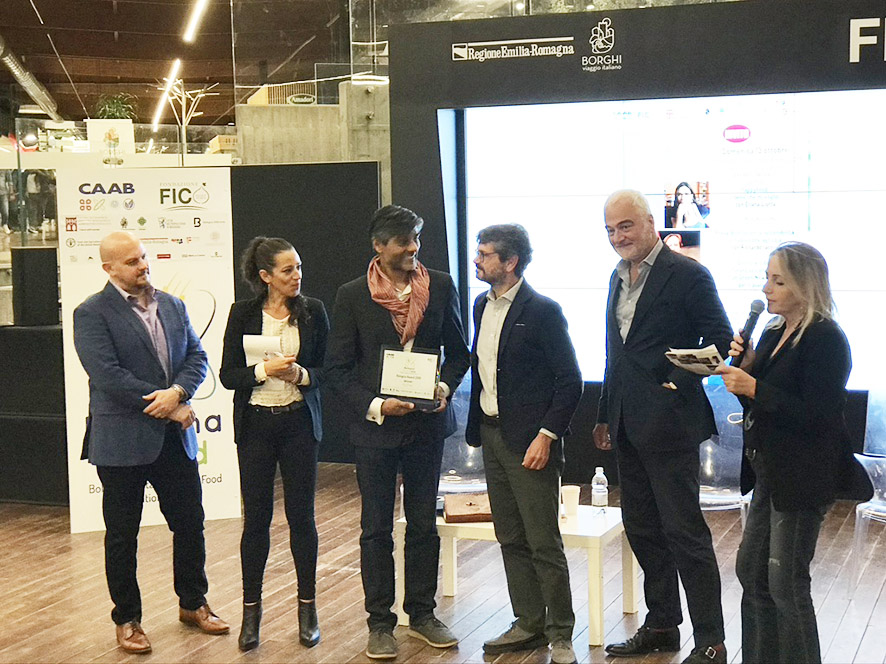 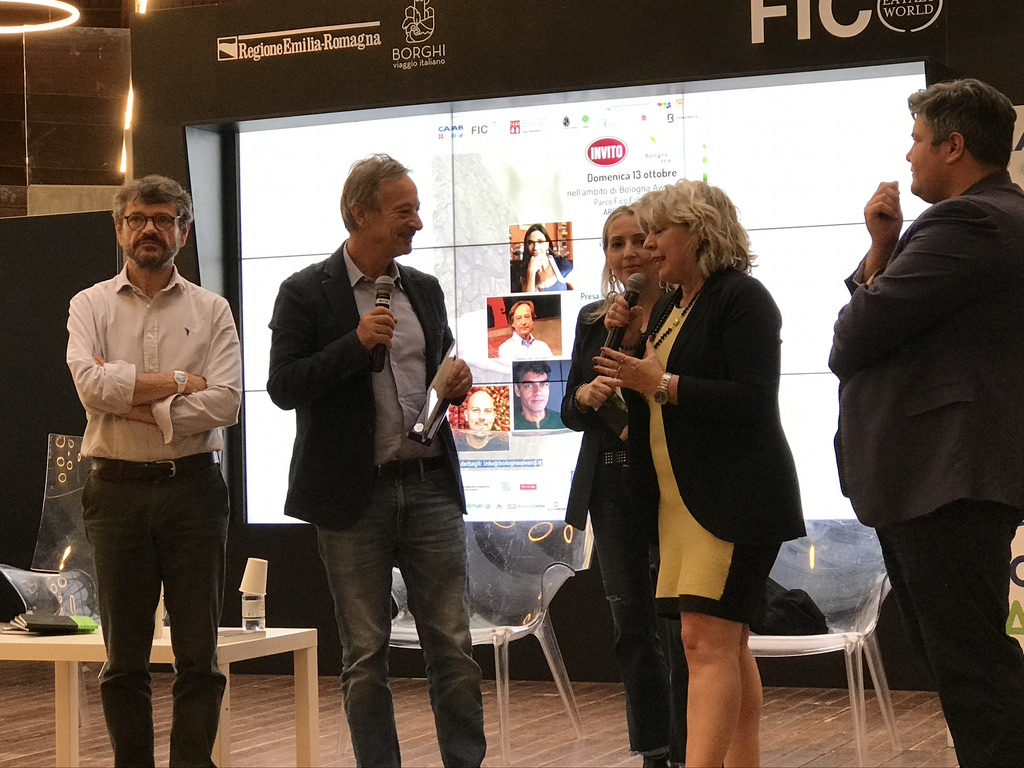 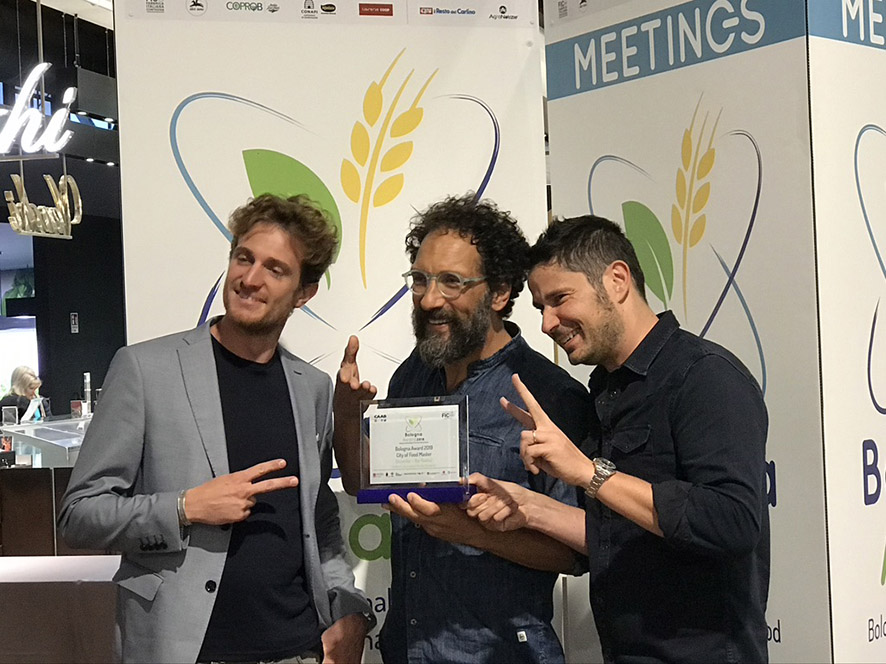 The objectives of the Bologna Award –The International Sustainability and Food Award - are:

The Award therefore aims to enhance the scientific research and the  initiatives in the agricultural and agro-food sectors carried out by people, institutions and companies in the name of sustainable and lasting development.

The unique aspect of the Bologna Award is that the winners, from the moment of acceptance, they commit to donating  the value of the Award to sustainable, long-lasting and / or supportive projects and initiatives in the sector. The initiatives to which the Prize will be destined are chosen by the Winner.

The Prize is awarded by an international jury (link to the page) chaired by the Agro-economist Andrea Segrè. The awards are directed by the Agronomist Duccio Caccioni in collaboration with the Communication expert Daniela Volpe.

The award was conceived and promoted by CAAB Centro Agroalimentare di Bologna in collaboration with the Fondazione FICO, with the support of the Chamber of Commerce of Bologna, sponsored by the Emilia Romagna Region and the Municipality of Bologna. Since 2019, as part of a specific agreement, the Awards are organized  in collaboration with FAO, the United Nations organization for Agriculture and Food as part of the events organized for World Food Day (16 October). A further important partnership was launched in 2018 with the Italian Ministry of Foreign Affairs.

The first edition was celebrated on the occasion of the World Food Day on October 16, 2015 at the International EXPO of Milan - the following editions were held in Bologna. After the first edition, the Prize was transformed and meetings, workshops, lectures and shows dedicated to food and sustainability were organized during the days immediately preceding and following the World Food Day.

Winners of the first edition - 2015 - were, ex aequo (equally placed), the Italian scientist Salvatore Ceccarelli, who has dedicated his work and his talent in underdeveloped and warring countries and areas, such as the ICARDA Center in Aleppo - Syria today destroyed by ISIS; and the non-profit organization Northwest Atlantic Marine Alliance, founded by fishermen from the North East coast of the United States to promote the marine heritage as a common good of the planet, applying scientific research to the full sustainability of fishing practices.

The 2017 edition went to the Italian researcher Matteo Dell’Acqua together with Ethiopian farmers from the communities of Melfa and Workaye, with the extraordinary project that united the most advanced genomic research with ancient rural knowledge.

The 2018 edition awarded Sunita Narain, the Indian environmentalist who heads the CSE - Science and Environment Center in New Delhi - recognized worldwide as a guiding reference for developing countries - "for identifying in food  the strategic element of sustainable development and for the innovative research on the subject carried out in recent years through the Science and Environment Center ". A special mention of the Bologna Award 2018 went to the Dévelo Student Association of the University of Milan - Faculty of Agriculture chaired by the researcher Pietro De Marinis, "for having developed agroecology as a reference technique in the formation of human capital in Haiti" through training projects involving local farmers.

The 2019 edition awarded Raj Patel, a professor at the University of Texas at Austin, a writer and activist who has been involved for many years in the issues of access to food and sustainable development for: "the articulated analyzes conducted by Raj Patel on the challenges that modern world must face and reflections on the innovative vision of the 'Green New Deal', which represents a concrete response to the Sustainable Development Goals set by the United Nations. Bologna Award 2019 goes to Raj Patel for supporting the right of citizens around the world to eat healthily and healthily, also in light of the food crisis that affects many regions of the world and is destined to worsen with the consequences of climate change ".

The 2020 edition awarded Giacomo Grassi, who translates science into a political goal for sustainable development, a crucial element for achieving the goals of the 2030 Agenda set by the United Nations. Because of this, the Bologna Award 2020 goes to Giacomo Grassi, senior researcher at the Joint Research Center (JRC) of the European Commission, in recognition of the research conducted in a key role of interface between scientific monitoring and regulatory implementation of sustainability objectives. Sustainable forest management can make a significant contribution to the reduction of greenhouse gas emissions: for having witnessed that forests play a key role in the mitigation of climate change through the addition of CO2 absorption, for support in the design and implementation of strategies useful for achieving the Paris climate objectives, the Bologna 2020 Award rewards Giacomo Grassi, recognizing in his analyzes on the role of forests and in the estimates of CO2 flows from terrestrial ecosystems, a strategic factor for the definition of policies developed by the United Nations, within of the Framework Convention on Climate Change. A special mention goes to US activist Leah Penniman, leader of the movement for food justice, organic and regenerative farmer, founder of the organic family farm Soul Fire Farm.